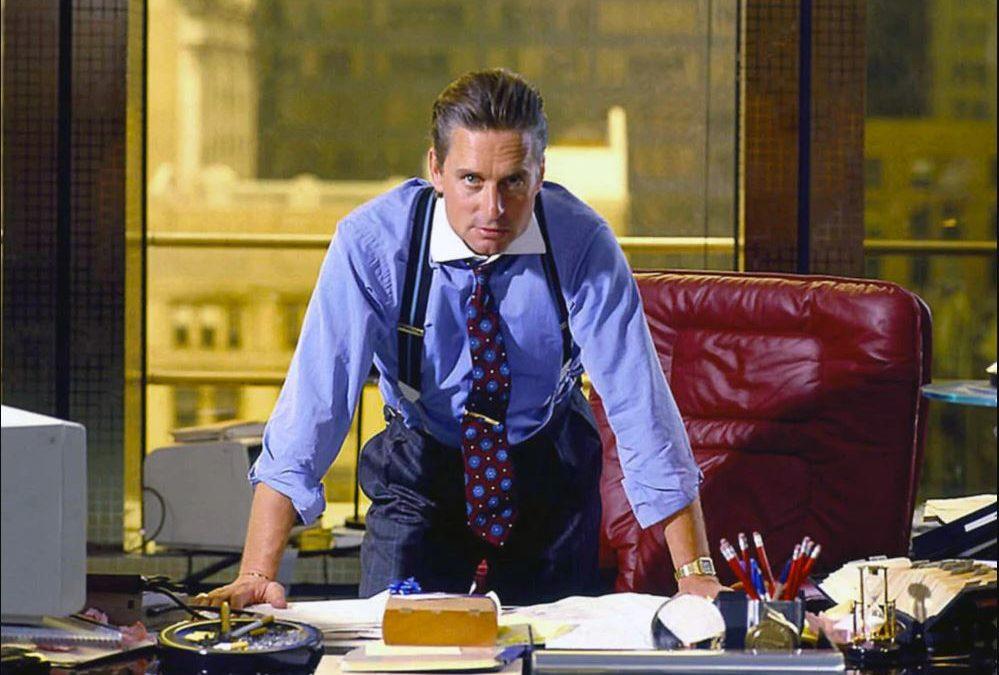 Use these quotes as a foundation for your investment strategy.

Oliver Stone’s 1987 film “Wall Street” was a film based loosely around several stockbrokers and financiers wrapped into one character, Gordon Gekko played by Michael Douglas. Of course, rich men are often portrayed as evil, greedy bastards that lack heart and soul such as Scrooge from “A Christmas Carol” and Potter from “It’s A Wonderful Life”… Gekko’s character is no different. However, there are several Gekko quotes that I believe are gold when it comes to investing advice!

#5 “The point is ladies and gentlemen that greed, for lack of a better word, is good.”

Speaking of evil bastards, being rich for some reason means that you have no soul. Even Jesus is quoted as saying “it’s easier to fit a camel through the eye of a needle than for a rich person to enter the Kingdom of Heaven.” Unfortunately, Jesus set the tone for generations to come that all rich men are evil. I believe what makes some rich men evil is that when the government is too large and powerful, it enables rich men to use their influence of wealth to corrupt the powerful people in government to do their bidding. Limit government, and limit the power of rich people.
We are all greedy. Even poor people. Greed can be good because greed motivates us to become better and improve everyone’s lives. If Steve Jobs wasn’t greedy, he would have never had the motivation to change the world with his inventions of the Mac, iPhone, Pixar, etc, etc. Greed is necessary to make all of our lives better. We should embrace greed to a point and stifle government power that exacerbates the inherent greed that lives in all of us. Poor people want to steal the wealth of the rich and use the government to do so. Wealthy people use their influence to create loopholes to pay fewer taxes. And the middle class is stuck in the middle of the greedy poor and greedy wealthy who use government influence to their advantage. Limit government and we limit bad greed!
No offense Jesus, I’m going with Gekko on this one! I may have just blown my chances to enter the gates of heaven with that statement.

#4 “The mother of all evil is speculation.”

Speculation is just a nice word for saying gambler. And in today’s world nearly everyone is a speculator. You should only invest in what you know. But unfortunately, most people rely on financial brokers who give them investment advice. But the reason they’re called brokers is that they’re brokers than you. It’s best to invest in what you know and leave the speculating gambling to the professionals. And if you want to invest in what you don’t know, you need to educate yourself on that topic. It doesn’t mean that you can’t invest in real estate simply because you don’t know it. Just become a student of it before diving in headfirst. And start small when you take action for the first time. So if you make a mistake, it’s not a life-crushing blow to your net worth.

When investing in stocks, real estate, or businesses, it’s best to research 100 stocks, homes, or businesses, pick 10 to take a deeper dive into them, and choose 1 of those initial 100. That way you know you’ve done your research and picked the best deal out there.

I always talk about the velocity of money. An economy thrives on constant movement and exchanging hands of money. In my master class, I show you how to take your own money and make sure it’s constantly moving to continually build your net worth. Money never sleeps in a thriving economy and it should never sleep for you. But that doesn’t mean to blow it on a bunch of cars, boats, and RV’s… it means moving money around to different vehicles to compound your net worth.

#1 “The most valuable commodity I know is information.”

This is the foundational quote for Money-Act. We teach people about money using filmmaker techniques and movie references. As mentioned in #4, educating yourself on money is the only way to see your net worth expand like the rich. Learn about the history of money, how money works in today’s world and you can set yourself up to re-write movie history and become a nice wealthy person that protagonists are based on instead of the antagonist Scrooge’s and Potter’s of the world.