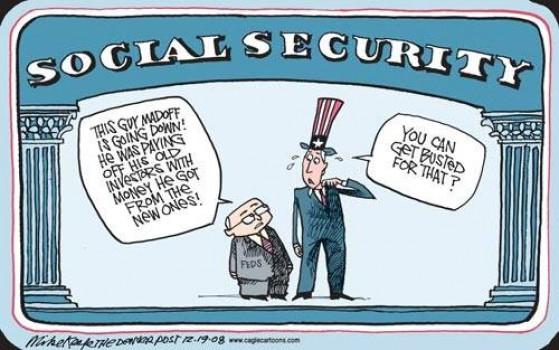 The greatest Ponzi scheme in history.

Social Security was supposedly created because we were all too dumb to save for retirement ourselves.  But it’s not like they saved a dime of the money we put in.  Nor did they invest a dime we put in to grow with inflation.  (In fact it’s quite the opposite) It was pitched as forced savings, but they just spent it the minute they garnished worker’s wages.  The way it really works is that workers are taxed now, but are paying the benefits of workers from the past…. which are the retirees of today.  So the money the retirees of today had put away into social security when they were working, paid for previous retirees.  That is a Ponzi scheme.

If workers of today stopped paying into social security, it’s not like they can dip into the supposed trust of Social Security because the trust is backed with an IOU. How can they say there is money in the trust when the US is nearly 30 trillion in debt?

The only reason this Ponzi scheme has lasted so long is that it is a forced Ponzi scheme. You’re held at gunpoint if you don’t pay it. Some people laugh when I say that, but let’s break it down…. If you don’t pay your taxes (which social security is a tax), then you go to jail. If you refuse to go to jail because you think the system is unjust and fraudulent, then they put a gun to your head to take you to jail. Therefore, it is no joke when I say you are held at gunpoint to pay your taxes which includes social security. It’s a forced Ponzi scheme.

But even forced Ponzi schemes will collapse one day under their weight. Just this last year when more benefits were paid out than tax revenues, that just made the situation so much worse. Instead, the Federal Reserve created money from nothing to keep the phony economy rolling, but that damages the value of the very dollars they create. And at the same time damages the value of the social security benefits they pay out. Eventually, trust will be worn thin on the dollar and with it, down goes the social security, Ponzi.

The CPI (Consumer Price Index) was rigged to make inflation seem lower than it is. This way, they can give retirees a nominal increase in benefits to supposedly rise with inflation, but in real terms, the benefits were cut. Because the prices of food and energy which are not factored into the CPI have gone up. Also, because they devalued dollars by creating them from nothing. So a dollar increase in benefits to supposedly rise by the CPI rigged rate of inflation is a devaluing of the benefits in real terms. That’s why social security has become impossible to retire on over the years. No one believes they can retire on social security alone.

We pay this enormous tax in every paycheck and our employers have to match the tax on top of that. Think about what you could do if you got to keep that money and your employer could also pay you that matching benefits directly to you if social security was discontinued. I think most people would rather keep that money and invest it properly if they had the choice… rather than continuing to pay into the forced Ponzi scheme that is pretty much worthless by the time they retire.

So while we can’t ignore paying into this Ponzi scheme, for now, we can continue our financial education and not rely on what’s left of social security when it’s time to retire. Bernie Madoff could only dream of creating a Ponzi scheme this enormous. His biggest blunder was not becoming a politician because FDR got away with creating the greatest Ponzi scheme the world has ever seen…. Outside of the Federal Reserve Central Bank:). But that’s another story.

There was a movie made about Bernie Madoff called The Wizard of Lies with Robert De Niro and Michelle Pfieffer. You can watch the trailer here.