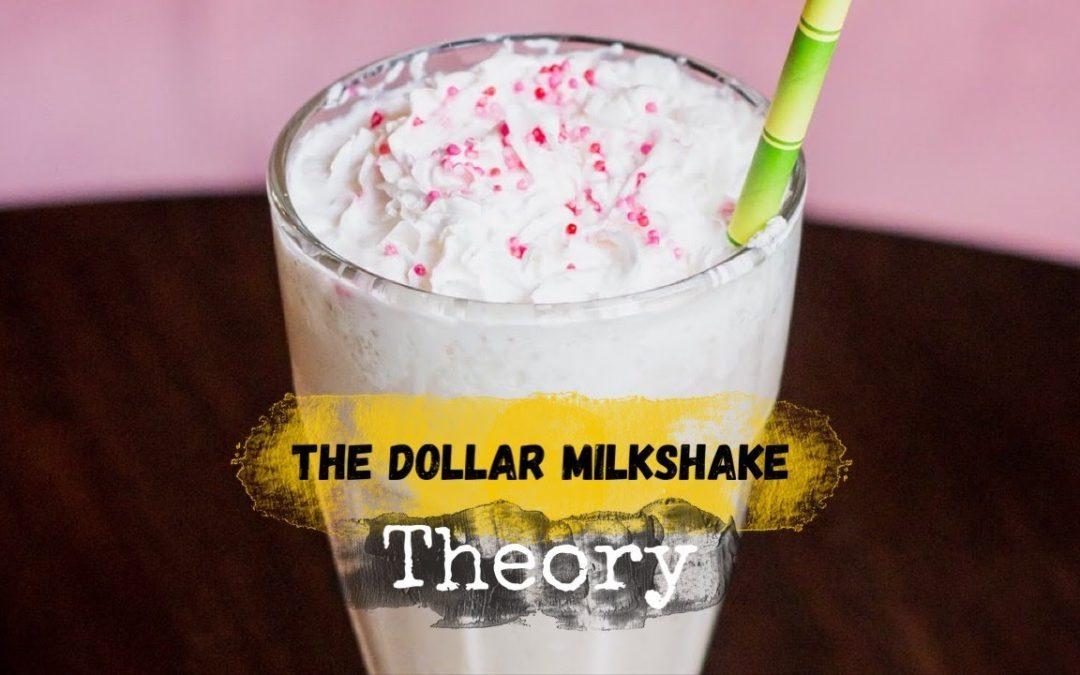 “I drink your milkshake!”

That line from the movie “There Will Be Blood,” with Daniel Day-Lewis is the tag line for asset manager Brent Johnson. Since it deals with movies and money it’s right up my alley.

Brent forecasts that there will be deflation followed by inflation as ultimately the dollar will have to be replaced at some point down the road. The theory is that because the USD is the reserve currency, its widespread use globally causes it to stay valuable against all other currencies, even with all of this money printing. So the dollar is like the straw in the other country’s currency milkshake, sucking up capital investment because of its reserve status.

I listened to a recent podcast with him on the George Gammon Rebel Capitalist show and he still feels the dollar will remain strong, even with all of this money printing. He points out that all the other countries are printing money and blowing massive amounts of currency for “stimulus.” The largest percent of total sovereign bonds owned by a central bank is Japan at 44%, Europe 42%, Canada 42%, Australia 39%, UK 36%, US is 23%. So the US is about half as overblown as Japan, Europe, and Canada. This means that if the US goes down, so does everyone else. I believe that to be true as well, however, living in Canada, I don’t see the government handouts like we’re getting in the US. I mean, I don’t even pay taxes in the US, but I still got my 1400 check! The difference is the US is the world’s reserve currency… period! And the bankers have completely squandered that privilege and there is likely no turning back.

Essentially what Brent is saying is that if the dollar goes down against goods and services, meaning prices are going up… it can still go up against other currencies. Remember back in 2008 when it was a huge deal for the government to spend 800 billion for the bailout? That seems like pocket change today as we see multi-trillion dollar stimulus bills every few months. And somehow the dollar is the cleanest shirt in the hamper?

And what all this means is that, even though other countries have been foolish enough to keep this system going, they have no incentive to let it fail because they’ll be in trouble too. And I believe the US allies could be colluding with each other in a clandestine currency war. I mentioned recently on a social media post that Obama started a currency war with the world in 2010. The Canadian Dollar was worth more when I moved here back in 2011. It’s beginning to look like the same pattern as the last financial crisis. First, it gave the US a phony economic boost by devaluing the dollar against other currencies, so the US could get back on its feet. Then after a couple of years, other currencies began to devalue against the dollar to get back on their feet. Are we seeing that same pattern again as the dollar has devalued quite heavily in the last month? Even the bank of Canada has discussed raising interest rates toward the end of the year to supposedly cool off the housing market that has never busted in the last 30+ years. It’s WAY overdue! Anyway, there is either a real currency war or allied countries colluding with each other to keep this system going as long as possible. Kicking the can as far down the road until an inevitable failure.

But that’s the US allies. Russia and China have been de-dollarizing themselves for the last 15 years. Russia has made no secret that they’ve been stockpiling gold for over 15 years and have the greatest GDP to gold ratio in the world. China has been secretly hoarding gold and no one knows how much they have. But they have announced that they are making a Yuan Crypto… will they back it with gold? It would be a major blow to the system if they came out with this announcement. I’ve also heard the term “axis of gold” which includes a group of countries that the US routinely sanctions (kicking them out of the dollar payment system called SWIFT if they aren’t doing as the US says) that are banding together to trade with each other. They can do this by settling trade payments in gold which is not traceable. That could be years away or it could happen tomorrow. We just need to be prepared for it by putting ourselves on a personal gold standard. 10% of investable assets in gold and silver. The Pound Sterling slowly lost its reserve status to the US over about 30 years. That may mean we’re halfway there, but who knows what the true timeframe is.

Brent always states that he could be wrong and is hedged for both outcomes. Inflation or deflation. That hedge is gold. As Jim Rickards says, Gold is ahead I win, tails I can’t lose situation because it goes up in value in both cases historically. Canada is extra scary when you realize that they’ve been printing money and monetizing the debt…. And sold off all of their gold in early 2000 when it was at its lowest price. Same with the UK. But the US still has 8000 tons of gold in Fort Knox to back up the currency if needed. What it means is the dollar price of gold will go to $15,000 per oz if the base currency is backed at 40% as it was in the past.

Eventually, securing your assets with a 10% backing in gold in my opinion will be like a currency milkshake for your wallet. “I drink your milkshake! I drink it up!”

If you are starting to build your own online business, quizzes can be the best way to understand what your customers need and lead them to the products or services that suit their specific needs. Take a look at the platform I use for my character quiz if you’re interested. Super easy to use and only a one-time fee vs a recurring monthly fee with other platforms. https://lnkd.in/dQUed_Fwww.linkedin.comlinkedin.com And here’s an explanation of SQB with me featured… https://lnkd.in/dg6XqUa