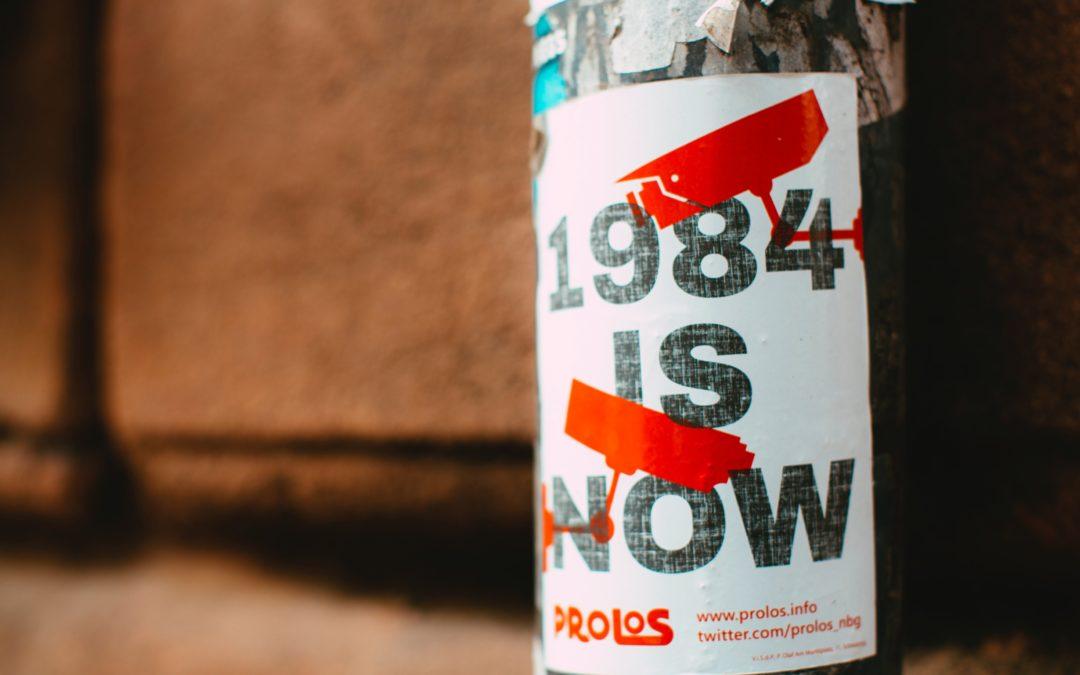 Whether you’re a mask wearer or a non-mask wearer you have to admit that we are living in Orwellian times. The movie 1984 based on George Orwell’s novel was a dystopian world of government control, thought police, and stifling freedom.  Maybe the title should be changed to 2020.  And instead of fiction, it should be re-classified as a reality tv show.

This covid thing has created a hysteria not seen since 1693 and the Salem Witch hunts.  Today, that over the top hysteria has led to millions out of work with a shutdown of the world economy. Millions of healthy individuals stifled by government control, mainstream media and social media thought police.

But what is this really about?  Could it be a cover up for an economy that was on the brink of collapse?  Instead of sounding like what some would call a conspiracy theory without anything to back it up, let’s look at the collapse in the financial sector that started in September of 2019.  Three months before the supposed outbreak began and 6 months before they figured out how to use it as an excuse to print the money they needed to prop up this phoney economy.

Take one look at this Federal Reserve chart from their own website. 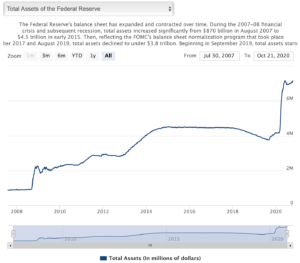 Their balance sheet starting at the end of 2019 began to spike up.  The repo market began to collapse.  Overnight lending spiked to over 10%.   With this much debt in the system, governments, businesses and individuals can’t afford this kind of change in interest rates.   It would completely collapse the economy and expose this phoney economy we’ve been living with for the last 2 decades.  It would be FAR worse than the great depression.  So they are doing whatever they can to keep this house of cards from collapsing.  Also notice the huge spike in printing that happens at March 6th (you can scan it on the FED’s website)…. before the US shut down!  This shutdown of the economy sure feels like a nice excuse to print more money in 3 months than the US had in its first 220 years of existence.

But when you look at the chart above… why isn’t the monetary base at 27 trillion like the national debt?  That’s because the US treasury was monetizing the debt by selling treasuries to Japan, China, and other countries, as well as the FED.  Now, no country will lend us the money, so the FED is the lender of last resort!  As the world weens itself off the dollar because the US has weaponized it with sanctions, we can expect an epic collapse in the dollar in the not so distant future.  When that collapse takes place is too hard to predict.  Some are saying 2023, but the truth is, no one knows.  You just have to be prepared.

So how did we get duped into this 1984 dystopian world here in 2020?  Let’s remember, shutting down the entire economy was first an experiment to see if the virus could be slowed or completely stopped within a matter of weeks. Here we are months and months later and that experiment has turned into supposed fact, that if everyone would just stay inside, this whole thing would be over in 6 weeks.  But instead we blame the idiots who won’t just stay inside. When you look at the charts of countries who have shut down completely or those who remained free like Sweden, you wouldn’t be able to differentiate between the two.  The curves are the exact same or even better in the free country.  Take a look at this comparison between the UK and Sweden.

I was talking to a good friend of mine in California this week.  His sister is a nurse and their hospital is actually submitting deaths as covid related when they actually died from something else.  This is helping broke hospitals in California rake in much needed money, if a death is marked as covid related.  Here’s a government website showing congress’ approval to give hospitals 20% more for a patient with covid through the CARES act… which obviously incentivizes broke hospitals to check that box whether covid truly killed the person or not.  No wonder the US has one of the largest case and death counts in the world.

Governments always choose to let no crisis go to waste. There is talk about issuing government ID’s that track people with immunity.  But do you really think they’re going to limit this power to just this virus?   They will expand that power just as they had with the Patriot Act. That was supposed to stop terrorism and instead it was expanded to spy on the American people for all sorts of things.   Another Orwellian government program.

This article tries to prey on people’s fear by highlighting these strange side effects of the virus.

Among 224 total suspected cases and 90 laboratory-confirmed cases of COVID-19 from 39 countries with information on symptom duration, the average duration of symptoms was 12 days.  Out of millions of people around the world, these numbers mean that the below side effects are pretty rare.

So, I did a simple google search for rare flu side effects and found this article.  Strikingly similar side effect for the common cold and flu, but are just as rare as they are with covid.  So why is the media using these scare tactics when the exact same thing happens with the flu?  Even the World Health Organization (WHO) has said the lockdowns do more harm than good, but these articles continue to perpetuate the fear.  As Ron Paul said, there is no vaccine for tyranny.

Let me also clarify that I’m not some Covid denier.  In fact, some of my family members in a small town in Montana have recently come down with it and are suffering from it.  My prayers are with those who have it as well as with members of my family who truly could be fatally affected by it due to age and illnesses they are battling.  Just as I don’t want my wife to get it, or even the flu as she’s recovering from a severe stroke.  This is the last thing she needs.  It’s very real, but it should be treated the way Sweden treated it… with suggestions on how to keep those around you safe, who are at the most risk, but continue to live your life.  This thing is highly contagious and no one wants to get it, so it should be taken seriously… just not putting the world on house arrest.

The point to all of this is that while the world is rolling over and willingly giving up their freedom in this 1984 dystopian reality tv show we’re living in, the real reason is to mask the enormous problems in the financial sector of the economy.  This thing was crashing at the end of 2019 and by shutting down the world, there was an excuse to counterfeit an unprecedented amount of money in a very short period of time, without causing panic in the system.   How does the stock market continue to stay afloat when the world is shut down?  It’s all money printing.

People can be angry or happy that Biden is now president, but I hate to burst your bubble…. it truly doesn’t matter.  So no need to be depressed if you’re on the side that lost, and no need to commit to the false hope that things are going to get better if you’re on the side that won.  We don’t need slogans, we need sound money and freedom.  And as long as the Federal Reserve exists we will all continue to be slaves to this dystopian system.  This house of cards can’t keep going forever.  Protect yourself, your family and your assets and make sure you’ve allotted a 10% allocation to physical gold and silver.  And if you have play money, do as Warren Buffet did this year and buy some solid gold mining companies.  Peter Schiff’s company, Europacific has a good gold fund to check out if you don’t know what you’re doing.  Do your homework as always for any investments!

While this sounds heavy and like I’m being a Debbie Downer, its all about opening minds to the possibilities of freedom from these shackles that try to bind us as well as positioning yourself to be on the right side of what will likely be the greatest wealth transfer in history.  Its not 1984 and 2020 is almost over.  Time to smile again whether they continue to try to keep up with this charade or not.  Cheers!